Ghost Who Walks wiki
Register
Don't have an account?
Sign In
in: Characters, Comic Characters, The Phantom, Female

English, Bandarian and an unknown number of other languages.

Julie Walker and her twin-brother Kit, the future 17th Phantom, were born in 1852. They were educated in Denmark, the home country of their mother, Asta Jensen. Both the twins were trained by their father, the 16th Phantom, until her brother assumed the mantle as the new Phantom in 1869. Julie had the distinction of serving as the first female Phantom, assuming the mantle as 'The Ghost Who Walks' on several occasions when her brother was injured or missing.

In the lineage of The Phantom, it is not only the son who becomes the Phantom. Sometimes a lady in the lineage would also take on the task of the Phantom in a similar Phantom outfit. The centuries old Phantom chronicles has a mention of a female Phantom, Julie Walker.

In 1852, twins were born in the Skull Cave - Kit and Julie. They were the children of the 16th Phantom and both received the same rigorous jungle upbringing. When they were adolescents, they traveled to Denmark to receive an education in their mother's home country. When Julie was only 16, she was engaged to the British Lieutenant Nicholas Bridges. he was killed shortly after by a stray bullet shot by his corrupt father who used slaves to build a railroad in Bangalla.

When their father died, Julie's brother assumed the mantle as the 17th Phantom. But when he was injured or absent, she took on the role of the Phantom in his place. As the Phantom, she saved the life of a young missionary, Paul Colbert, whom she then later married. After a few years, he became ill with malaria and died. Julie then traveled to Paris to study medicine at the Sorbonne University under Louis Pasteur. When she returned to the jungle, she used her knowledge to help the jungle's inhabitants. She also continued to substitute for her brother on several occasions.

She lived a long life and spent her last years in the Skull Cave in the early 20th century, and was laid to rest there by the 19th Phantom.

In 1969, Julie Walker was created by Lee Falk, creator of The Phantom. She was the only female Phantom mentioned by the author. Although Lee Falk created Julie Walker, many other authors have also written stories about how she was brave and intelligent taking on the role.

As depicted in many stories, she has a pet Cheetah, Fury, and her horse is named Flash. With the help of Fury and Flash she is found to have faced many threats in the jungle and also have protected the hundreds of years old Phantom secrets and treasure from the thugs who tried to break into Skull Cave.

Meru is Julie's native companion from the Pygmy tribe who helps her in her adventures. Once she has saved Julie’s life as well from a witch who was bent upon killing the ghost who walks. 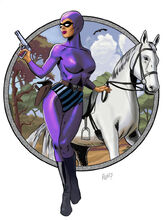 Julie as The Phantom and her horse companion, Flash. 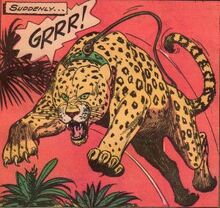 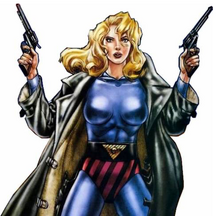 Julie Walker as the Phantom, depicted without her cowl and domino mask.

Community content is available under CC-BY-SA unless otherwise noted.