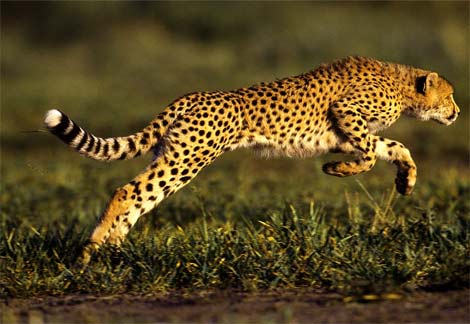 The cheetah (Acinonyx jubatus) is a large feline native to Africa and Asia. It is the fastest land animal, capable of reaching speeds of 75 miles per hour. It can accelerate from 0 to over 60 mph in three seconds. It is an unusual feline, unable to roar or retract its claws. Once a status symbol of power and speed, the cheetah is endangered.

The cheetah is the only living member of the feline genus Acinonyx. It is highly adapted to running down its prey and living in grasslands; it is the least adaptable of the "big cats" to new environments. Because it is so adapted to very specific ends, the cheetah is an atypical feline--it rarely, if ever, climbs trees, and cannot fully retract its claws, as this allows for extra traction during a sprint. The cheetah has a unique body shape, with a narrow waist and a deep chest. The enlarged chest holds the cheetah's enlarged heart and lungs, which circulate oxygen quickly through its body. The cheetah also has large nostrils, to increase its intake of air as it runs.

Cheetah fur is a golden-tan, with black spots about 2-3 centimeters wide, which act as camoflague. The cheetah's underbelly is white, and has no spots on it. The cheetah has a relatively small head, and high-set eyes. The eyes are marked with "tear marks," black lines that run from the corner of its eyes to its nose. The tear marks keep sunlight out of the cheetah's eyes, and aid in seeing long distances. Cheetahs average in weight from 80 to 140 lbs.

Write the second section of your article here.

Retrieved from "https://ghostwhowalks.fandom.com/wiki/Cheetah?oldid=1850"
Community content is available under CC-BY-SA unless otherwise noted.