Ghost Who Walks wiki
Register
Don't have an account?
Sign In
Advertisement
in: Characters, Comic Characters, The Phantom

Profile pic of the 22nd Phantom

English, Bangallan, Bandarian and an unknown number of other foreign languages.

The 22nd Phantom is the 22nd person in a long line of secession to have taken The Oath of the Skull, and thus, assumed the mantle of The Phantom. Like his father, and his father before him, and so on, he has committed his life to end piracy, injustice and cruelty. The current Phantom's birth-name is Kitridge Walker (Also known as Kit Walker Jr.) It is a tradition of the Phantom's to name their eldest son, who are to be the next Phantom in the line of secession, to be name Kit. Interestingly, Kit is the younger sibling of his older sister, Heloise Walker. Like all those before him, he was born in the Skull Cave, the Phantom's base of operations, and spent his formative years in the jungles of Bangalla.

The 22nd Phantom's story begins with no Phantom. The 21st Phantom was the last of the line of succession of Phantoms stretching back over four centuries. Kit Walker Jr. refused to take up the mantle as the masked crime fighter and instead chose a comfortable ride of both life and family, while handling the day-to-day affairs of the Walkabout Foundation, a philanthropic organization created by one of the previous Walkers to help support charities in Bangalla and the surrounding nations of Africa. Kit had broken the chain and was no longer The Phantom. However, no matter how much he fought it, fate had other ideas. While at a fundraising event held in Bangalla, there was an attempt to kill Kit on his way back home. A terrorist organization by the name of Krieghund (German for 'War Hound'), orchestrated by their leader Peter Quisling, had the motive of taking over the Walkabout Foundation for malicious intentions. He possessed an army of invisible soldiers who targeted and then killed Kit's family.

Upon surviving the plane explosion and crash near a Bangalla village, Kit and his friend/apprentice Michael soon discovered that his Kit's wife, Radhi, and son, Mosi, were killed. Now in a vengeful state, Kit could no longer deny his destiny and took up the mantle of The Phantom to track down the killers. Kit Walker ran into a squad of mercenaries in Bangalla, each of them arrayed in stealth suits that turned the one who was wearing it, invisible. Capitalizing on his past training to eventually become The Phantom, Kit tracked down each of the mercenaries and killed them, including the specific ones that killed his wife. In the ensuing bloodbath, his apprentice Micheal was gunned down and died from his wounds. Kit then captured some of the mercenaries and interrogated them to find out who was responsible for the death of his family and their motives.

With his family and his son dead, Kit ritualistically burned their bodies in a great funeral pyre, so that their spirits could go onto join the ghosts of his forefathers. With the death of his family and no heir apparent, Kit could have well been the Last Phantom. Soon rumors abounded amongst the criminals in the region that the myth - 'The Phantom' - had returned, as it was confirmed by the numerous skull marks on some of their men who had encountered 'The Ghost Who Walks' in the Bangalla jungle.

While continuing his pursuits to know more about Krieghund, Kit left the jungle area and managed to bump into a friend, his father's old mate, Guran, and his sons who were dedicated to protect The Ghost Who Walks like always. With the world believing he was dead, Kit, now The Phantom in the true sense, geared himself with guns, ammo and a stealth suit acquired from one of the mercenaries. He tracked the war mongers to their den in Pretoria, South Africa. He managed to sabotage the manufacturing facility and blew it up, ensuring its destruction, but not before securing some of the high-grade military technology to utilize himself, in his war against Krieghund. Following the destruction of the Krieghund facility, The Phantom personally called Quisling's private number, and warned him that, like a ghost, he would not see him coming.

After the cloud of suspicion around Krieghund cleared up, the Bangallan government sent out a search party to seek out the missing philanthropist Kit Walker, but no remains were to be found. Peter Quisling, the head of Krieghund was none too happy about this outcome, for without positive confirmation of Kit's death, he could not move on with his nefarious plans. Meanwhile, Kit traveled across the Atlantic Ocean with both his animal companions, Hero and Devil, aboard a ship heading towards New York. During the journey he cherishes fond memories of his now dead wife, Radhi, and his father's remarks about his love life. While enroute, the ship was attacked by some local thugs, who were quickly dealt with by The Phantom. Following this incident, Kit eventually managed to reach New York.

Now in the concrete jungle of New York City, The Phantom tracked down the criminals working for Quisling. Kit learned more about the invisible stealth suit that he had acquired, and while in pursuit of his foes, he often saw mental flashes of his father and his advice on various circumstances. While trying to achieve his objectives, The Phantom savds various innocents from local thugs. Kit finally managed to locate and get to an individual named Bock, one of Quisling's men, near Central Park West in New York. He then let him go free to take a message to his boss..with skull marks all over his face! This sent a clear message - 'The Ghost Who Walks' was coming for you!

The Phantom finally discovered that the person that had orchestrated all his recent troubles was Quisling, as well as his nefarious intentions. He traced back the villain right to the Walkabout tower, a part of which was the breeding place for Krieghund. This terror organization was led by Kit's former right hand man in the Walkabout Foundation, Peter Quisling. With the area heavily guarded by Quisling's men, it was difficult for Kit to reach the boss that easy. The villain was finally taken down but there was destruction. Before parachuting from the roof the building, The Phantom had set a small fire, that would soon rapidly spread and engulf the entire building. The destruction of the entire Walkabout Foundation, which was, as Kit realized, was his way to take up the self-appointed masked crime fighter's role. With the philanthropic foundation gone and his wife and son killed, he was now in a true sense, just a Ghost Who Walks and 'The Last Phantom'.

Following the events at the Walker building, Kit was injured and on the run from both sides of the law. While on the lam, he reflected on the brutal training he received at the hands of his father to continue the legacy of 'The Ghost Who Walks'. As Kit remembered, an adventure unraveled with father and son as heroes, together, for the first and last time.

As the violence in Bangalla escalates, Kit Walker realized that it was finally time for The Phantom to return to his fated role as protector of the Deep Woods. But getting back to Africa proved more difficult than he anticipated. First, 'The Ghost Who Walks' had to escape from New York. On the road, and on the run, Kit, Hero, and Devil made for the border with hired assassins in hot pursuit. And in the shadows of a legendary natural wonder, Kit finally managed to evade his pursuers and make good his escape.

Eventually, Kit managed to return to Africa, but the road back to Bangalla was threatening at every turn. Forced to travel home by riverboat, Kit witnessed firsthand the horrors of the civil war tearing Bangalla apart, as well as the insidious trade funding the violence - blood diamonds.

Now back in Bangalla, Kit made his way back to the legendary Skull Cave. The complete origin of the legendary Phantom was replayed in his mind as he learned them through the the chronicles in the cave. How the Phantom came to be and who were his worst enemies. As Kit discovered secrets from the past, his mind was haunted by the chronicled thoughts of his forefathers.

Aided by Bandar tribesmen, Kit Walker finally finds the source of the blood diamonds funding the Bangalla coup d'etat, but when The Phantom attempts to permanently shut down the dangerous mines, he discovered that the forces of General Kiboko were trading in a commodity even more precious to win the war - that of the lives of the local people, to mine the diamonds.

As The Phantom battled to end the war ripping Bangalla asunder, Kit finally learned the dark secrets behind the Walkabout Foundation's role in fomenting discord in the troubled African nation. The Ghost Who Walks began his crusade for justice in the Skull Cave. But his end might come in another subterranean grotto when he meets a woman named Diana Palmer! Kitridge Walker, after surviving a plane crash, improvises a makeshift outfit as The Phantom. 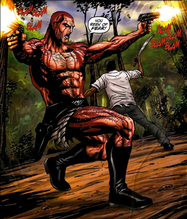 KItridge Walker, informally assumes the mantle of The Phantom, takes the fight to a group of mercenaries intent on killing him.

The Phantom disguised in his 'Mr. Walker' persona. 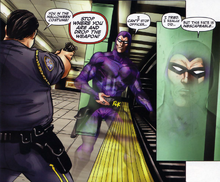 The Phantom activates the stealth effect of his suit and disappears.

Community content is available under CC-BY-SA unless otherwise noted.
Advertisement