Ghost Who Walks wiki
Register
Don't have an account?
Sign In
in: Characters, Comic Characters, The Phantom

The Phantom, 'The Ghost Who Walks'

'The Ghost Who Walks'
'The Man Who Never Dies'
'Guardian of the Eastern Dark'
'the Mysterious Commander'
Mr. Kit Walker (Real name)

English, Bandarian, Bangallan and an unknown number of other foreign languages.

The 21st Phantom is the 21st person in a long line of unbroken secession to have taken The Oath of the Skull, and thus, assumed the mantle of The Phantom. He, like his forefathers, has committed his life to end piracy, injustice and cruelty. The current Phantom's birth-name is Kit Walker (it is a tradition of the Phantom's to name their eldest son, who are to be the next Phantom in the line of secession, to be named Kit). Like all those before him, he was born in the Skull Cave, the Phantom's base of operations, and spent his formative years in the jungle of Bangalla.

The Phantom also lives a personal life with his wife, Diana Palmer-Walker and their two children, Kit and Heloise. But this does not mean that he has a separate identity like Batman has Bruce Wayne's and Superman has Clark Kent's. It is no secret that Mr. Walker is another name of the Phantom. This also doesn't mean that people know what the Phantom looks like under the mask, for even as Kit Walker, his face is never revealed, not even to the readers.

No one except the Phantom's wife can behold the face of the Ghost who walks, for as the Old Jungle Saying goes -- "He who sees the Phantom's face, dies a horrible death!"

Like his ancestors before him, Kit Walker was born in the Skull Cave, the Phantom's main residence within the Deep Woods of Bangalla. It's namesake is taken from it's appearance as it is carved out of the rock face of a dormant volcano that looks like a massive human skull. It is said when he was young child his fist word was "Phantom." Tutored in reading, writing, and match by his beautiful mother Maude, he learned the ways of the jungle from his father and Bandar pygmy warriors. At the age of 12, he was sent to the United States to live with his aunt and uncle, Lucy and Jasper (in earlier editions, they were known as Bessie and Ephraim), in the small town of Clarksville, while he attended grade school and college.

After a challenging adjustment to life away from the jungle, he found success in academics. He also made great achievements in sporting activities, setting school records and lettering in four sports. While in college, he knocked out the world heavyweight boxing champion in an exhibition match and was sought after by scouts to enter the sports worlds as a professional.

When he was a young adult, suddenly, his father was mortally wounded and he was called back to the jungle to become the next Phantom in an unbroken line of more than four hundred years.

Throughout out his son's adolescence, Kit continued to put his son through the brutal training commonly used by the current Phantom, to prepare the next generation to eventually assume the mantle as 'The Ghost Who Walks'. When Kit Walker Jr. was in his late teens, he would don one of the variant colored Phantom suits and go on jungle patrols with his father. During one such patrol, they encountered a kidnapped actress, Regan Fawkes. A rising Hollywood starlet-in-the-making, she was kidnapped from the Bangalla Deep Woods location set of "Guerrillas in the Midst." Her kidnappers declared a hefty ransom for her return, or else she would be returned - in pieces. After The Phantom subdues her captures, Kit Jr. frees the kidnapped Ms. Fawkes from her bonds. The Phantom has her mount up on his horse, Hero, so that he can take her back to safety, meanwhile he has his son to go and ensure the kidnappers didn't follow.

The young Phantom-in-training made short work of the kidnappers, quickly subduing them. While he was in the middle of thrashing one of the kidnappers, he spoke up and admitted that the whole kidnapping was sham. It was all Rachel's idea to drum up more publicity for her failing career. While he was busy interrogating the kidnapper, suddenly, a shot rang out. Fearing the worst, Kit Jr. rushed back to his father's side. His father had been shot by the actress, gravely injuring him. Now missing his left eye, the injured Phantom warned his son that the actress had two rounds in her pistol. Trying to warn his son of the imminent threat, the actress shot Kit Jr. in the back at close range. Rachel then beat a hasty retreat back into the jungle. Though gravely wounded, Kit Jr. was determined to make her pay. Grabbing his father's right hand, the young Phantom-in-training took the Skull Ring from his father. He then pursued the fleeing actress. Kit Jr.'s wolf companion, Devil managed to catch the female scoundrel and knocked her to the ground. Having his companion stand aside, young Kit vowed to handle the situation. Picking her up from the ground, the two looked at one another, with Rachel wondering what would happen next. Then without warning, Kit lashed out and hit the actress in the face, permanently marking her with a Skull Mark on her once-unblemished face. Making his way back to his father, he informed The Phantom that he had marked her. He then handed back the Skull Ring, telling him that he wasn't yet ready for the responsibility as The Phantom.

Though Fawkes later claimed she escaped her abductors using skills she learned for her latest action flick, sources close to the troubled actress reported that she was actually freed by a mythic Bangalla folk hero. When she appeared in public, she would often be seen covering her face with a scarf or handkerchief. Despite her best efforts to have the Skull Mark removed from her face, eventually she was found with her nose cut off. Rumors persisted that the once famous, now infamous former-actress, might have engaged in self-mutilation. Speculation abounded whether or not she committed this desperate act due to depression following a botched nose job, so common to image-conscious actresses. Or perhaps, she did so due to the unproven but widely believed allegations that she staged her own kidnapping to boost a faltering career, two decades earlier.

"My dearest Kit."
"By the time you read this I'll be gone...
"I'll go as all Phantoms go...Fighting to the last. Defending the Deep Woods."
All its treasures."
All its secrets, all the way down.

— Taken from the chronicles of the 21st Phantom - final journal entry of Kit Walker Sr.

After a long courtship Kit married his childhood sweetheart Diana Palmer in a lavish jungle ceremony notably attended by two African presidents and fellow Lee Falk creation Mandrake the Magician. Soon afterwords Diana gave birth to twins, a boy named Christopher "Kit" Walker-Palmer (primarily known as Kit Walker Jr.) and daughter Heloise Walker-Palmer. He is primarily assisted in his adventures by a tamed pet wolf called Devil and a white horse named Hero, whose speed is legendary. His best friend since childhood is Guran, the now current chief of the Pygmy Bandar tribe. The 21st Phantom remained a devoted family man knowing that in his line of work, whatever time he had with his family was precious, but always holding strong the family tradition of fighting injustice wherever it might take him. Their young son, Kit Jr., continued to train to someday take the sacred "Oath of the Skull" and become the 22nd Phantom. 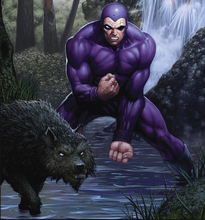 The aging 21st Phantom and his lupine companion, Devil. 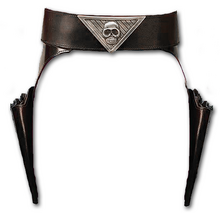 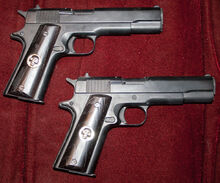 The Phantom displaying his proficiency with blow darts against an unsuspecting enemy.

The Phantom's tradmarked signet rings - the Skull Ring and the Good Mark Ring.

Community content is available under CC-BY-SA unless otherwise noted.